It's the moment they've been waiting for all summer. The Glazers must surely have had one eye on this weekend since the disappointment of last seasons campaign.
They have been villified this summer and had their ownership of the team questioned. But, to be fair, they have remained strong and put their faith in the existing coaching staff and even backed the management team with cash to be able to strengthen the playing squad.
Yep, that's right folks, it's the return of the NFL season with Tampa Bay opening up with a road trip at the Minnesota Vikings.
Coach John Gruden is under a little bit of pres....whats that? It's supposed to be a preview of the derby and not the new NFL season? Get me the editor of the site NOW...

In truth, tomorrow is going to be the first real test of the season for us. Coming off the back of the international double header we are probably in better shape with only Richard Dunne seeing any meaningful action whilst a majority of United's side have been away.
Confidence is high in the City camp at the moment, with Reyna and Musampa talking up our chances this week and espousing the value of the team spirit which Pearce has fostered. Talking of Pearce, good to see he picked up the manager of the month award for August - his second award in his short spell in charge. 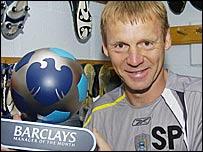 Last season you may recall we went to Old Trafford with just Anelka up front and came back with a 0-0 draw but I don't think Pearce will be as defensive today.
Team wise, I have a feeling that he will bring Distin back in to the starting line-up after his run out in the reserves midweek, which will leave a choice between Onouha and Mills for the right-back position.
United have started well this season, with a 100% record and no goals conceded, with much of the credit going to the steady influence brought by Edwin van der Saar. Along with James, I think he is the top keeper in the Premiership but I don't believe United have been really tested by any of the sides they have faced this season so it is perhaps a little difficult to lay too much credit so far.
Ronaldo will be missing for them on compassionate grounds along with Super-Gaz so Giggs may return to the side whilst it is rumoured that Keane will not play after playing for Ireland midweek, so the 'new Keane' aka Alan Smith may come in midfield.
I think defensively United could still be suspect abut it is a case of whether we really have a go at them enough to exploit it, whilst van Nistelrooy (more on him later) and Rooney seem to be hitting form this season which could cause our defense (and midfield) a lot of trouble.
We will probably approach the game relatively cautously and try and use the pace of Vasell and the ability of Cole to hold the ball up to get the midfield supporting. The key for us will be our defence and if we can hold them then I think we have a definite chance.
I don't think it will be as tight a game as last season though but bearing in mind our league record is not too bad over the last few visits my prediction is I'm going to take us to get a 1-1 draw.

Hopefully, I'll have a couple of special match reports to post up at the start of next week. Stay tuned.

P.S. I know he is playing for Holland on this clip, but doesn't it just sum up all you hate about him? Click on the fourth goal by van Nistelrooy.