What a calamity? Who cares.

Share All sharing options for: What a calamity? Who cares. 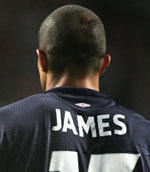 Denmark 4 England 1. So, it was all David James fault was it? Ok, first goal aside what could he realistically have done about the other three? An inept second half performance from an England side widely considered to be one of the challengers for the World Cup next year is tossed aside amidst the pictures of James lampooned with donkey ears and the like, a defensive performance bordering on the shambolic but still James is the one led out to be publicly stoned.
Thankfully Stuart Pearce leapt to his defence, stating that 'it has always been that way with David, people pick up on any mistake he makes but all I am concerned about is what he does for us on Saturday and he has not let me down yet'.
A view shared by the (sane) majority of City fans who are only really concerned with the fact that he has been in outstanding form since joining us, and long may he continue to do so.

Elsewhere, two young Blues have been farmed out to Championship sides to gain some experience. Willo Flood and Karl Bermingham have joined Coventry and Burnley respectively. It is a good move for both players as Flood has lost his way a little since making his debut last season whilst Bermingham impressed for the reserves last season and continued this form into the pre-season. Hopefully, both players will come back the better for this as opposed to disappearing off the City radar.

Stuart Pearce reacted with dismay over Bolton's £4 million valuation of midfielder Stelios, who City placed a £1 million bid for last weekend. Pearce insists that he will not up the valuation and hopes the fact that he is in the final year of his contract and the deadline is approaching will force Bolton into a re-think as if Big Sam thinks he will get £4 million for him he must be mad - although he must already be if he thinks Bolton are a decent side.