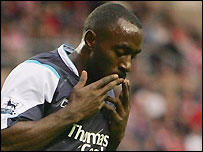 We are top of the league, I said we are top of the league! Ha, ha, you may mock but hey, why not enjoy it eh?
The table never lies and all joking aside, look at the starts that Everton and Bolton made last season with less talented squads than we have and how they got themselves on an early roll which carried them for the rest of the year.

Work commitments meant I had to decline watching the victory on Al-Jazeera or whatever non-Sky channels can pick the games up this season.
In truth, the game did not sound the most appealing - in particular Chris Waddles 'insightful' summarising with most of the early action being the abuse that David James received from the home crowd - is he on the way to becoming this years Premiership boo-boy (previous illustrious winners including messrs. Diouf, Mills, Bellamy and Savage)?
It appeared to be a lot of huff and puff from Sunderland without really testing James before we took our two chances of the half pretty well, and it was good to see Vassell get off the mark.
Disappointing to allow a goal back from a set-piece so close to half-time but I was never really sweating that the outcome was ever in doubt.
A handy three points though, albeit against a side who will do extremely well to get anywhere near safety this season. Good to see Pearce stating in his post-match interview that he was not entirely satisfied with the performance and that he expects an improvement against Portsmouth on Saturday.
One interesting note from the game was the crowd of under 34,000. I have noticed a few of the early Premiership games seem to be played in front of lower crowds than we have seen. Why is this? Perhaps the season crept up on us a little bit with the Ashes series still taking centre stage. It will be interesting to see the average attendances over the next month or so.
Anyway, confidence should be building and three points most definitely expected on Saturday at home to Portsmouth.