Stelios to fly in?

Share All sharing options for: Stelios to fly in?

City have announced on Saturday lunchtime they have tabled a £1 million bid for Bolton's Greek midfielder Stelios Giannakpoulos. The 31 year old midfielder is out of contract at the end of the season and are hoping to have the bid accepted as Bolton face the prospect of losing him for nothing at the end of the season.
The timing of the announcement upset Sam Allardyce for one, accusing City of attempting to unsettle the player, and citing this as the main reason he was left on the bench for their game at Villa.
Admittedly, the timing was a little strange but as soon as news gets out one way or the other from sources close to the player/club insider/current squad member (* delete as appropriate) then surely the timing doesn't make any difference. In this day and age, are there many transfers that happen which don't involve an influential role played by the press with the right word here and there?
Allardyce today has indicated that a higher bid may force Bolton's hand and has challenged City to come up with an improved offer and that the club would hold a meeting with Stelios and his agent.
Would he be a good acquisition? Stuart Pearce thinks so, stating that he 'ticks all the right boxes' for him, well, I'm hoping that he meant footballing wise and not some dating agency feedback form.
He would be an option for the right-hand side to replace SWP and is a useful player in my opinion, and capable of getting you ten goals a season. He is apparantly a 'young 31' (hey, I might use that one myself next time I'm out but I'm digressing here) with typical cliched attributes involving engines and motors thrown in a for good measure.
If we are to sign him then I still think it is imperative that we still get a creative midfielder in, as I think Saturday was evident that we still lack that guile and craft which would have opened up games like that. 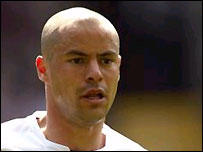 What? You mean it's the not the guy who runs EasyJet? Damn, here I was looking forward to 'EasyTicket' down at Eastlands....