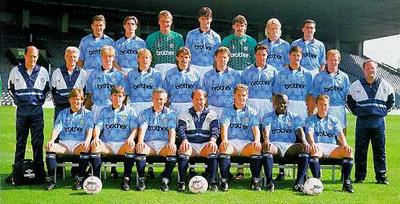 Trautman, Swift, Bell, Lee, Summerbee, Francis, Tueart, Kinky, Bernabia? All legends that come easily to most Blues, but every City fan must have had that first hero that they loved. Maybe the first player they saw score or whose genius touched them in a way like no other.
For me it was David White (back row-top left). Whitey first came onto the scene about the time I first started going on my own properly to City in the time of the old first division just before we got promotion under Mel Machin, playing alongside Redmond, Brightwell, Hinchcliffe, Lake et al.
He banged in plenty of goals playing initially as a right winger - and was one of the hat-trick hero's against Huddersfield, before playing as a central striker later in his career.
It was in this position he earned his first and only England cap against Spain before making way in the next game for a certain Alan Shearer. If only he hadn't fluffed that chance in the opening couple of minutes...
Whitey scored 96 goals in 341 appearances before he eventually moved onto Leeds in a swap deal for David Rocastle before finishing his career at Sheffield United.
His finest moment for me was the cross he put in against United for the fifth goal in the 5-1. An absolute stunning first-time cross that to this day I don't know how he managed to put it right on Andy Hinchcliffe's head without breaking stride.
There were plenty of City fans who did not like Whitey and he did possess a unique ability to dribble the ball out of play and the word 'deadly' would not readily be associated with him. It is difficult for a home-grown player to have a long career at City without the boo-boys at some stage getting on their back, but David White will always be my first City hero.